Posted on October 23, 2019 by flowstatemusic Posted in NewsTagged News

ROOTSBASE – a night dedicated to presenting the very best in Folk, Trad and Roots-based music – opens its doors again in Edinburgh on Tuesday 29th October.

RootsBase takes place on the final Tuesday of every month at the Gilded Balloon Basement, located in the Rose Theatre.

This season, we are proud to feature 2018’s Up and Coming Trad Artist of the Year, ASSYNT (29th October), the incomparable ADAM HOLMES (26th November) of Adam Holmes and the Embers and The Magpie Arc, as well as multi-award-winning Gaelic singer and TV Presenter JOY DUNLOP (17th December), who was nominated as Gaelic Singer of the Year in 2010, 2011 and 2016, and also won the coveted Royal National Mòd Gold Medal. 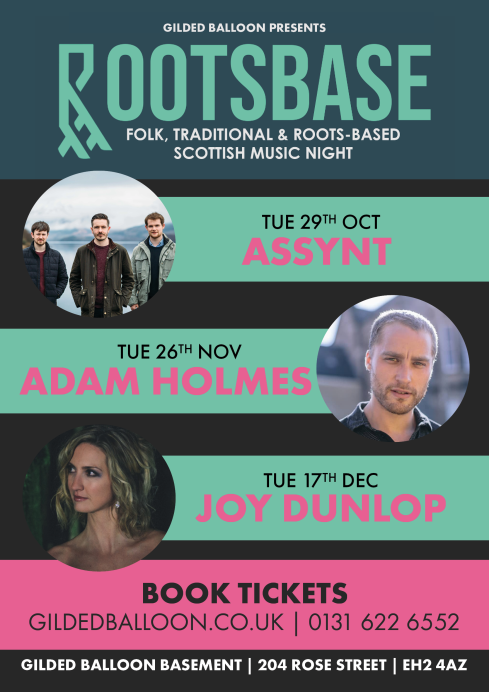 Overseen by Gilded Balloon Artistic Director, Katy Koren, the reason for expanding the company’s activities into folk and roots-based music, she says, is to put the cream of Scottish folk music in the spotlight, in the heart of Edinburgh.

“We are incredibly excited to be expanding our music programme at the Basement. As a local Edinburgh company, Gilded Balloon are passionate about showcasing the greatest artists that this city, and Scotland, has to offer. It’s important to the team here at Gilded Balloon to have as diverse a programme as we possibly can, encouraging fans of all different kinds of entertainment to come down to the new venue and see what we’re about. Scottish traditional music couldn’t be more healthier and more vibrant just now, and we’re thrilled to open The Basement’s doors to some of the best it has to offer.”

With many live music venues in the Capital having disappeared in recent years, Koren believes the emergence of the Gilded Balloon Basement’s RootsBase can reinvigorate the city’s live music scene.

“Like everyone else, we have been saddened and surprised by the rapid and wide-ranging closure of live music venues across Edinburgh. We hope that our new weekly night, RootsBase, will inspire more and more people to support and involve themselves in the revitalisation of Edinburgh’s music scene.”

Katy and Karen Koren, Directors of Gilded Balloon, said: “You know what they say: there’s no rest for the wicked! We’ve barely had time to put our wee feet up since the Fringe finished and already we can’t wait to bring the residents of Edinburgh the best in live entertainment over the coming autumn months. It may be an old adage, but there really is something for everyone at the Gilded Balloon Basement – so ‘mon down, pals!”

Tickets are on sale NOW